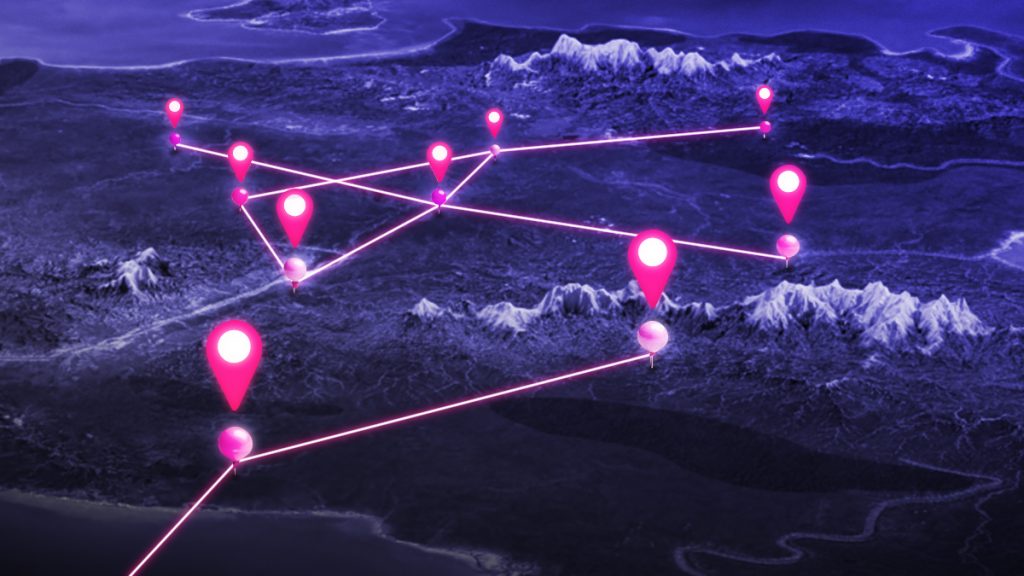 The Great Empire is not only the largest kingdom in Lootverse. It has the highest mountains and most of the landmarks from all of the five epochs of Lootian history. You can already discover these hidden gems on the map and explore the region. One way is hovering over the land and clicking on the points of interest you would like to know more about. Another option is typing the name or the location you are looking for in the search bar. You will be amazed at the stories behind historical buildings, bridges, harbors, and many other destinations waiting for your visit. To help your trip, The Lootverse Gazette editors selected some of the must-see landmarks.

Are you ready? Join us on this exploratory tour of The Great Empire.

The Gate is a historical site that acts as the southern entrance into the Great Empire, separating the region from El Territorio. It is the central point in the South End Wall between Mount Salus and Mount Paris. This privileged location allows visitors to have a great view of the mountains in the different seasons of the year.

South End Wall, West End Wall, and The Great Wall of the North

Three walls surround The Great Empire protecting the land on the limits with the other regions and the ocean. The South End Wall is a cross-realm border that runs the length of the southern edge. It goes from Mount Paris to The Gate, covering the southern side of Mount Salus, into the Salus Valley. Ancient stories tell that Jord, the Goddess of Land, crafted this gigantic stone wall. Elder civilizations used to believe that she was the one who carved the images of the Gods on the stone.

The Great Wall of the North is one of the most majestic historical sites in the region. This structure starts at the foot of Peak Hermes and expands along the coast. It was initially built as a barrier to protect the continent from ocean beasts. Finally, the West End Wall is located at the base of Mount Paris. Unlike The Great Wall of the North and The South End wall, most of this defensive structure was destroyed over the years as it was struck during the wars. However, it is still considered a representation of the glory witnessed on the western coast of the Great Empire for several centuries.

Zeugma Waters is a famous Dam in the region. Located right between Mount Paris, Mount Eleutheria, and the Great Dividing Range, it supplies the southern end of The Great Empire. Three races battled on this land: the Men, created by the Chief-God Kempe, the Visskin, originated by The Goddess of Intelligence Viss, and the Galdarians, brought to life by the Goddess of Death Niefel. Scholars and researchers from the Lootian Department of History and Natural Sciences are usually seen working around this area to find ancient weapons and utensils buried in the fields.

The Great Empire is also the kingdom of ten magnificent mountains, including the widest chain of mountains and the highest elevation in this parallel world. Starting with The Great Dividing Range: it is a combination of three peaks – Atropos, Lachesis, and Klotho. It is also called El Gran Rango Divisorio on the El Territorio side. It provides some of the most spectacular views of the continent and the ocean. For those into climbing and hiking, Mount Ares has an even more incredible experience to offer. With an altitude of 8,120 meters, it is the highest mountain in Lootverse. Mount Ares was named after the ancient Earthian Greek God, Ares, known as the God of War.

Achelous Reservoir and The Bridge of Poseidon

Loorverse is rich in rivers, lakes, and peaceful paradises where Lootizens can envision their future developments. The Achelous Reservoir is one of those incredible areas. Located between the Psamathe Sands and The Great Dividing Range, this impressive body of water is crossed by the Bridge of Poseidon, the fastest route to the Government Plaza and The Lootverse Gazette. If you want to explore the region, do not miss this unique spot.

The Great Forest of Medusa, The Barren Lands, and Psamathe Sands

Travelers to The Great Empire will also be amazed at the variety of the biomes in this land. The must-see destinations go from massive forests to vast and desolated deserts. In The Great Forest of Medusa, rumor has that magic is still around, terrifying those who dare to cross it. On the other hand, deserts such as The Barren Lands and Psamathe Sands present the solitude of the flat terrain that spans to the horizon.

Advanced technology is being developed and tested to improve the access to this parallel world, providing a real Lootian experience across all kingdoms. Until then, enjoy your time exploring the map and discovering many other destinations like these.