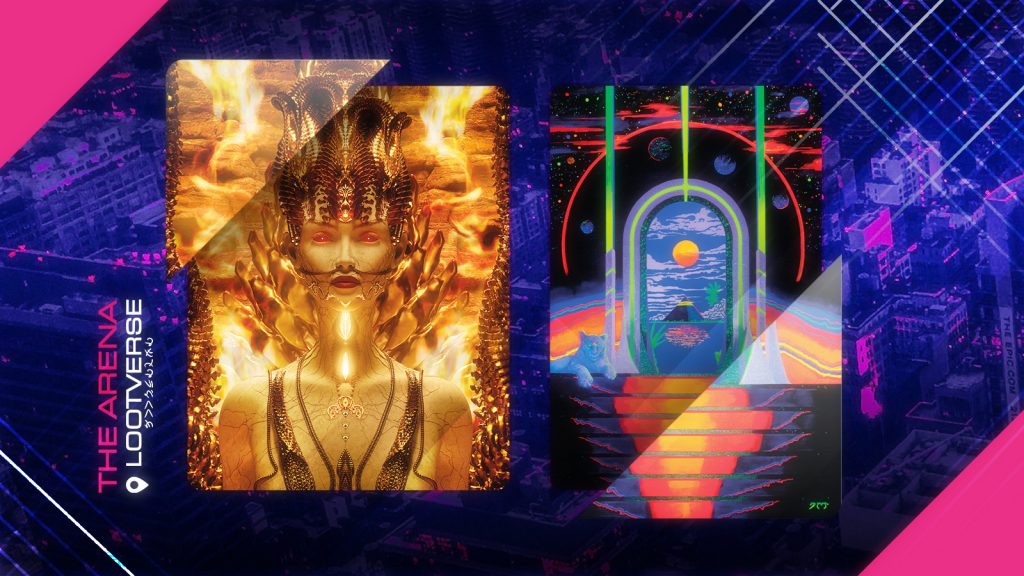 The first half of the year is coming to an end, and The Arena is blooming with artwork from brilliant artists reflected in Lootverse. All Lootizens can take part in the battles to win one of those unique NFTs. If you want to know a few of the creators behind those exclusive pieces before joining the game, this article is just for you.

The first personality is a fantastic digital artist who kept their identity anonymous, only known as 25m42. The Lootverse Gazette had the privilege to speak to this enigmatic and disruptive creator.

“I started doing 3D at the end of 2017 when a friend installed 3D software on my PC. I watched one after the next tutorial and got more and more into it. One day, I asked Beeple if he did the video “Zero Day” alone or if it was a team effort? He replied that he was alone making these insane animations. So I thought I could do something similar.”

The creator revealed that their work and career have a significant influence from the Swiss artist Hans Ruedi Giger (H.R. Giger), acclaimed for his airbrushed images merging the human physique with machinery. Another inspiration is Peter Gric, an Austrian painter and illustrator, who combines futuristic architecture with biomechanical surrealism, and fantastic realism. However, it was the work of Beeple that drove them to pave the way in the digital art space, creating incredible NFTs. For those who are not familiar with Mike Winkelmann (Beeple)’s fame on the NFT vibrant scene, he broke the records by selling an NFT for $69 million, in a Christie’s auction in 2021.

25m42 came from a creative family, and so it was in their DNA to keep this creative flow, but the passion for technology and numbers made this artist even more unique.

“It just feels good to create and learn new ways of doing what I love. It is amazing to me how many excellent artists are out there, and I had the honor to collab with some of them, which is a really great thing in the art scene.”

The set “Keepers of the Flame” proves that passion, dedication, and talent yield results. The NFTs Fava, Naïla, Aeïfa, Taïra, and Awa represent four elements and a fifth piece that connects them all. “My images are mostly something like a higher self or higher being, in general, that is more advanced than we are. From an ancient future,” said the artist.

From Nashville in The US, Pablo Marin is another brilliant creator showcasing his unique NFT collection in the Arena this month. He defines himself as a “graphic artist, designer, animator, and all-around artistic cosmonaut.” His talent came out very early, when he was only five years old. “By the time high school rolled around, I took all of the studio art courses I could get my hands on,” said Marin.

In 2012, the artist obtained a Bachelor of Fine Arts in Graphic Design At Monmouth University in New Jersey and then started to work in the apparel industry. Currently, he creates under the art and apparel brand Dega Studios and for the apparel company Threadless. His pieces are marked by the retro-inspired style, with fluorescent-infused paintings and psychedelic powered animations.

“I was born in the 80s. Grew up in the 90s and always jumped into the 70s. My work blurs the line between the red show and the futuristic. Using fluorescent paints in my final artworks allows them to live on seemingly two visual wavelengths, two different visible dimensions, living either fully in the white light or the black light.”

According to the artist, his NFT set “The Stargate Psychedelia” was inspired by his travels through the astral plane. The two art pieces in this collection, Entrada Quantanima and Satoshi’s Arrival, are a must-see in The Arena. It is almost impossible not to feel immersed in the flow of colors, lines, and distinctive aesthetics.

“The majority of us wake up from our dreams and dismiss them almost instantaneously. It is easy to take the magic of dreams for granted. On the other hand, it is a little bit harder to decide actually to do something about them. I’m excited to offer my work through this new technology Loot NFT has to offer. Currently, I’ve been having success as an artist on the platform. I was honestly blown away after my first auction. I look forward to sharing and completing my series, The Stargate Psychedelia through the Lootverse!”