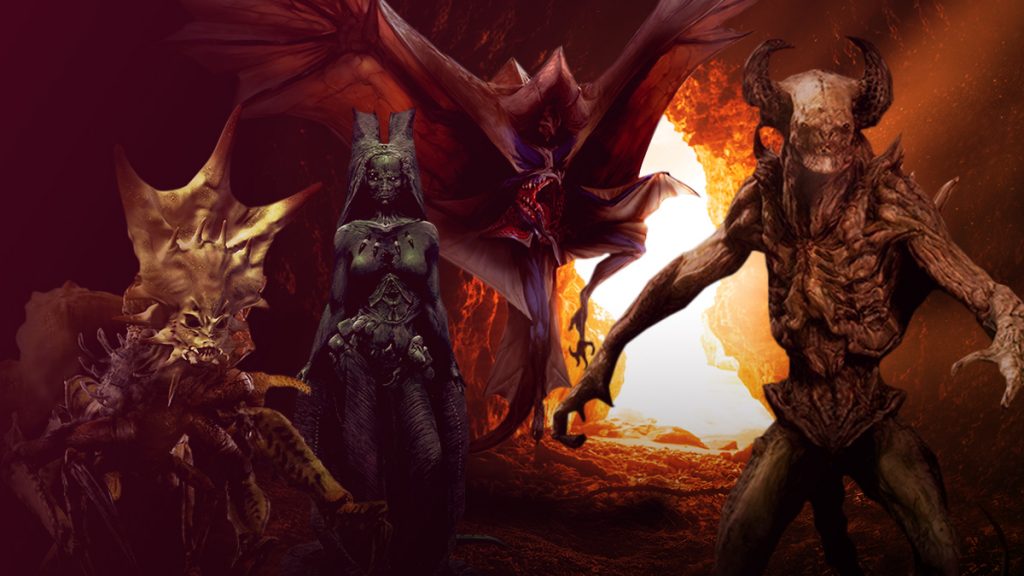 Following research by the Department of History and Natural Sciences, we have reached a stage where we can make visual adaptations from ancient scripts and findings. In this article, we documented the creative process behind the first visuals of the Underworld Demons.

For most designs so far, we try to make the compositions as crisp as possible, taking into account movement, clarity of personality, and physicality. However, for Demons, there is more to it that needs to be catered for:

Most Demon characters have their own stories and purpose in the Underworld. To cause chaos and consume negativity were obvious points to note, but some had specific goals and needs to keep them going.

Additionally, a basic storyline was provided by historians to start the drawings, and they were the primary guidance for our designs to depict the Demons correctly.

Serta was one of the most fantastic dragons ever living in this parallel world. Who doesn’t like Dragons? Based on this creature’s story, we wanted to demonstrate its dominance in terms of size and terror emanating from its wingspan. We referred to HBO’s show “House of the Dragon” as an inspiration to understand textures and scales. Besides realism, HOTD accurately portrays emotion in their Dragons.

For Serta’s statue environment, we wanted to make it the most epic one, with the floating rock and its narrow access, only to be presented with a fierce-looking Dragon above your head. Showing the proportion of the statue was key for future gamers to understand how immense Serta is to fight. Additional features such as wing spikes or horns level up its personality.

Selkum is more tenacious and agile. Being at least five times smaller than Serta, it is quicker to attack its prey and pounce with a fiery blaze. We made its neck thicker and longer to accommodate the fire gland chamber. The tail extends at the tip to provide Selkum more airtime and balance while spitting fire in mid-air. It was inspired by the salamander reptile family, with a bigger head than the rest of the body.

Triton is the second largest of the four dragons and an acid-spitter. We decided to show it in the deep realm of the Underworld, where hot jets of molten lava surge. The body of Triton is mainly that of a cretaceous creature, given its evolution in Lootian Waters. This gives Triton the ability to swim and cruise through narrow trajectories on the Lootian Oceans. Design-wise, giving it sharp edges on its feet makes this dragon more lethal. Imagine Triton latching onto its prey and spitting acid as it consumes them. Not a pretty sight.

Grungentrun is snake-like but adding the wings to it gives it an element of surprise attack. We consider this dragon to be most feared since it can charge and pounce at its target in an instant, and on top of that, it flies. Not as high as the others since it has to carry a load of its body mainly adapted to land prey. For the visual, a full extension of Grungetrun is best composed to show what Demon hunters can expect.

A failed experiment can result in chaos. Such is the case of Ganeni. Having titled “beastlike humanoid”, Ganeni was a challenge for us to portray. It was then decided to adapt some features from Niefel to put in Ganeni. Niefel’s trident has horns, and it could be a historical concept to add to the Lore for Ganeni to represent Niefel’s trident. Ganeni’s visual is also very fiery to show how parts of its body remained incomplete. Especially its face, where only the mouth can be recognized.

Ugly, spiteful, and uncomfortable looking. Yes. We took references on the deep water creatures adapted to low light environments giving Kakortal body extensions, strings, and crab spikes. These cater for movement and sense prey targets. The green color is best suited for camouflaging in the deep algae flora. When dormant, Kakortal can wrap itself into its shell conch or even fake an attack.

The white color represents where Eshay can be and also the high altitudes of its adaptation. We also added armor scales on its bane to make it more dramatic and epic. One lash of its tail can cause lethal damage since it is inspired by that of a crocodile.

Scott is menacing, and its story is even more. To depict that, a creepy and quirky version of a spider would best represent it. Similar to Triton’s feet, Scott’s movement depends on the high-pressure points it can exert from its legs. Having only six legs, Scott is faster than any other spider, making it harder to pin down.

I call her the Queen of Demons. Medea has similar vibes to a Succubus, hypnotizing and enchanting her prey. Putting her stature on a throne is best to show her domination and control power in the Underworld. Her wings make her stronger and give her the ability to roam.

One of our favorites, Harpy is a Silent Killer. Her wings are sharp and made of a rare metal. Her pose is an indication of its grace and how she can mislead her prey into their death. If you see in the artwork, we think that Harpy can blend into structures of its environment, adding a camouflage feature to her skill set.

As the historical description says, Wongliang is a Dwarf. That was the initial concept of its design, and we were mainly inspired by Gollum, the animalistic creature from the Lord of the Rings story. Besides its political skill set and cunningness, we thought of making Wongliang monster-like when it is in attack status, and it can bulge up to intimidate its opponent. Spikes along his arms and legs were added features to make it ominous.

Legion was one of the first few demons we sketched. It is depicted as prehistoric, and adding in-grown plants and flora to it shows how ancient this boar is and how tenacious it has been. Exaggerating the tusks was fun to experiment with, and it proved to be fitting to the story.

Imposing, intimidating, and fearless are traits that fit Norash. Very muscular and lean, Norash can attack with one blow or pounce with its hooved legs to kill its prey instantly. Once done, they like to flee into the shadows, so they are untrackable. Adding functional wings serve that main purpose.

Norashi is even rarer than Norash. Making their features different from each other, despite their relationship, makes them very risky to battle. Norash could be the lure, while Norashi passes the final blow with its fierce transformation and red scales. If one sees Norash, be aware that Norashi is also nearby for a surprise attack. Also, Norash has no mouth, it has a stomach that feeds itself with sharp teeth once latched onto a kill.

Bobayaga is the dark priestess. As historians say, she can’t be trusted. To represent her, we chose to dress her in amulets, chains, and a dark robe to trick Lootizens into thinking of her as a helpful witch. “Mantras” and “Tantras” are also seen tattooed on her whole body as a sign of rituals placed upon her creation. She is one of the most frightening demons in the Underworld.

Luciyal can be confused with Norash sometimes, but Luciyal is more aggressive in pose and tenacious. This devil is portrayed in its true nature but can morph into any being to take its soul and roam the Lootian lands. Since it is said that Luciyal could be a cross-world demon, we think that it is best represented as a prehistoric creature.

As a hidden message, we added an axe as a weapon for Bafomot symbolizing cattle brutality and hence his punishment towards attackers. Besides having fur over its body, Bafomot has goat hooves and the claws of a man.

Just like Eshay, Gwuai’s features are suited for high-altitude environments. Being a massive beast, this giant bear is muscular and intimidating. The statue itself can sometimes let a roar show its presence.

Nostros is very lean and slim when in its primary shape of a “werewolf.” As a wolf without fur, it changes its shape as it evolves and goes back to its unknown form. Hence, less energy is spent on creating fur around the skin. More detail is added to the face of the creature with a strong jaw and pointy ears to sense prey.

Here, we showcase Palik’s true form of a mermaid. It has the skull of a deep sea fish and large gills to be able to stay out of water for a while. Please, do not mistake the hair for what they are; they are tentacles used to latch on her hypnotized prey. Her tail is also razor-sharp and used as a defense mechanism for distancing herself from hunters.

Decimus (Greed of the Fallen Man)

Similar to winged demons, Decimus is much smaller but has more flying speed than all airborne creatures. Its four wings over its arms and legs provide stability, and it can change its course very sharply. One of its superpowers could be reducing its size to a bee to torment Lootizens.

We hope this extract brings forward more attention to the making of the fantastic beasts of Lootverse. We look forward to the Demons Game and hope to bring life to the demons, demonstrating their abilities in fights. Our role in the Art and Creations department is to make the experience of our users an enriching and immersive one through our visual concepts and stories.

Read More: The Scariest Evils Are Coming to Lootverse