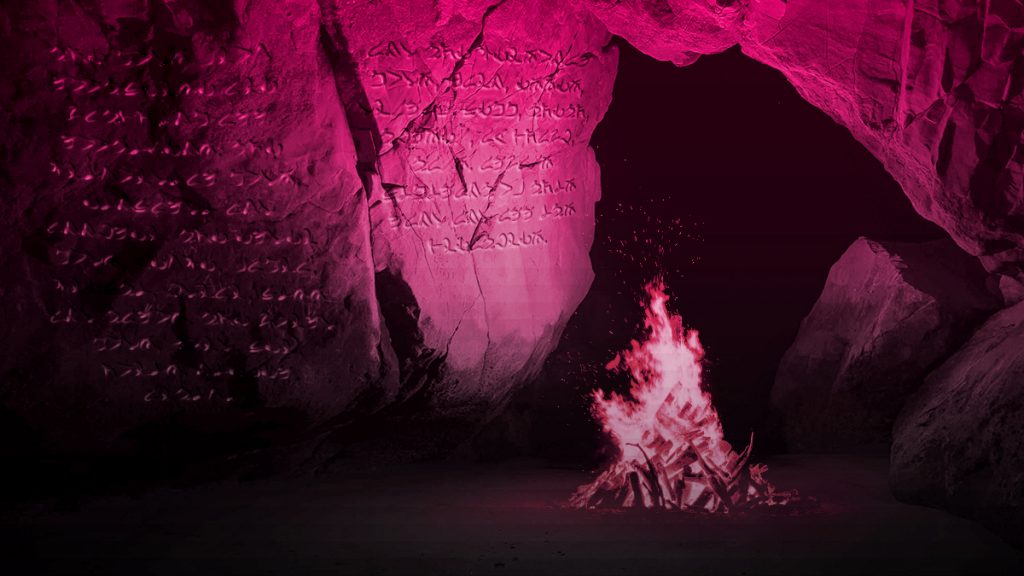 This article covers the process of designing an unconventional type or script of an ancient civilization at a certain point in the Lootian timeline. The challenge was to visually represent a communication medium of a writing system that evolved from Godly entities and the first beings of this parallel world.

With the development and understanding of the Lootian culture and geography, our team’s recent objective was to establish a ground narrative of our history and what was the key that initially powered Lootverse. Was it a world coexisting with the Earthian world all along? Was it a world with completely different physics or metaphysics? Did it have any scientific laws at all? Is Lootverse just a fragment of a parallel dimension? We are still digging deeper into these specificities.

These questions arise with the realistic design and story of our Lootian world. We are currently experiencing the birth of politics, entertainment, and economics from the ground up. At the same time, we want to do justice to what follows from that brand. As a designer and problem solver, it was my duty to ensure we create a tool that not only strengthens the Lootian brand but also creates opportunities in areas of History, Communication, and Art.

One of my initial inspirations for this project was the narrative and perspectives from the movie Arrival (2016), based on the short story Story of Your Life, by Ted Chiang.

Ian Donnelly: [reading from a book by Louise Banks] “Language is the foundation of civilization. It is the glue that holds people together. It is the first weapon drawn in a conflict.”

Another situation in this eye-opening movie was when they had to understand sounds from Heptapods (aliens in the movie).

Louise Banks: “…and “purpose” requires an understanding of intent. We need to find out, do they make conscious choices or is their motivation so instinctive that they don’t understand a “why” question at all. And biggest of all, we need to have enough vocabulary with them that we understand their answer.”

To apply the same analogy and create a lettering system in a backward manner involves research on existing evolved systems, such as Cuneiform, Egyptian Hieroglyphics, and Phoenician. With a shared culture, the writing system across the globe has evolved five times independently to create the English Alphabet we know today. After ideations, we decided to let the final design look like it emerged from the Gods of Lootverse and hence developed by the first men in this parallel world.

The Design Process: Style and Personality

How could Godly entities provide such knowledge and visuals to the early beings? There must be some medium, surface, or scribing powers the Gods possessed and empowered the scribes. It was then discovered (or rather narrated) that each God had their own symbol across Lootverse, where they were scribed magically at the location by “Messengers”. They have had apparitions in specific areas and provided divine knowledge to the first men (Messengers). As culture passed through generations, the first men had their own stories engraved on unique stones, later called Minosanite. This stone from Minos Island became famous for the cave walls with the first evidence of a writing system and language of Lootverse, namely Loeic.

What is the rationale for the shape and stroke, you might ask? In the act of engraving Loeic on the cave walls, the ancient men would perform rituals to communicate with the Gods. They used to stay in a trance to be able to transcend the holy art form into the writing we know today. Wild, sharp, and diagonal strokes prove the design was made in an irregular and confident manner, with casual inconsistencies.

The “blobs”, or termed as “terminals”, at the start of the writing indicate the tools that they used to carve the letters were sharp on one edge and thick on the other end. One can relate the similar aesthetic that the Greeks used from their ancient writing to form the “serifs and sans serifs” we know today. The “baseline” and “x-height” of the font maintain the 1:1 ratio, providing clarity and reliability. Traditional writing systems have “descenders” and “ascenders” in their glyphs, but Loeic uses diagonal strokes in its “counter” itself to resonate to sound variations.

“Kerning” pairs in the Loeic system were important to implement so that the lettering position and appearance differ when placed in an awkward shape. For example, the letter-spacing would differ for pairs “AC” and “AD” based on their original shape. More than 100 pairs of letters were kerned in the making of Loeic.

Loeic Native [Brush Bold] and Loeic Book [Ink Regular] were recently released on The Parliament Discord platform. They are available for Windows and macOS in TTF and OTF formats. Then, Lootizens can test and provide feedback.

Loeic is the first step towards a new communication means to strengthen the Lootian culture. The master plan is to create a working language with a set of vocabulary, grammar, and phonetics to make Lootverse’s Loeic the first-ever metaverse cultural language. But, for now, Lootizens can communicate in a fun and social way using the Loeic font and even learn how to write and develop versions of Loeic texts (English Transcriptions).

Loeic is a stepping stone to unveiling an unknown language of another dimension that could answer at least some of the questions from Earthian scientists and astronomers. Understanding Loeic fluently means understanding what is beyond the void and the massive black holes and wormholes connecting to Lootverse. No one knows what is behind this world. At least, not yet.