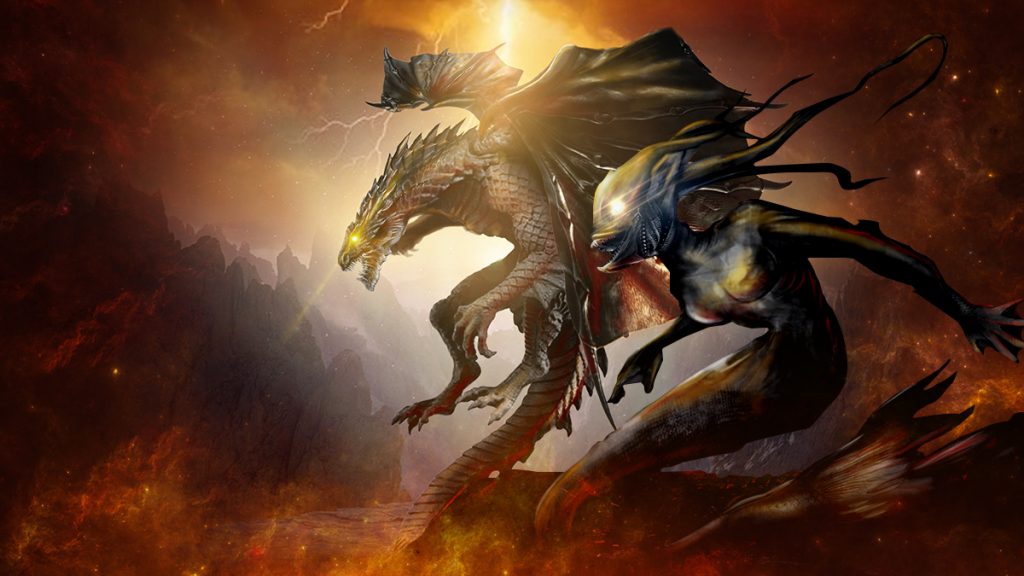 Dragons, serpents, and terrifying creatures have haunted Lootizens in all territories across the epochs. Now, you will meet the twenty-one Lootian Demons. Their frightening tales will send shivers down your spine. The Government of Lootverse has reported that some dreadful beasts are trying to escape the Underworld. Many apparitions were registered in the Lootian mainland and islands recently. These alarming events leveraged the general concern, and Lootizens are developing their battle skills and growing their armory to fight back if they encounter any danger. Bear with us to glimpse depictions of the Demons, their endeavors, and where they have spread terror and despair.

Serta is the largest dragon in Lootverse. When flying around the Underworld or the land of the living, its dark shadow terrifies anyone who sees it. Its battle roar is thunderous and can cower even the braver warrior.

With chromatic scales, this great fire dragon glistens when flying around. Its fire glands contain the power of a hundred volcanoes. Avoid defying it at all costs unless you are exceptionally well prepared with powerful shields and weapons.

Unlike the others, Triton is a sea dragon that has been spotted mainly in the western coastal regions of Lootverse from the north of The Great Empire to the Kingdom of Xbysl and the southern districts of Royaume De Satoshi. It does not roam very far inland, preferring the cold waters. Triton’s defense system is jets of acid that it spits at attackers.

This land dragon is a mainland dragon that usually appears in The Great Empire, El Territorio, Kingdom of Xbysl, and Royaume De Satoshi. It compares to a stealthy snake with scales made of the toughest stone. Legend has it that a simple stare at Grungentrun’s eyes can drain the life out of its victims.

Ganeni was created from Niefel’s attempts to bring a celestial being to life. Niefel’s failed experiment resulted in a beastlike humanoid, which many compared with the Earthian legend of Frankenstein. Its body could not absorb the flames of creation that covered it from head to toe. Those unfortunate souls who cross the path of this beast can see the fire emanating from around it like a natural armor.

This giant crustacean keeps warmer waters near the islands of The Medici Principality, the Eastern Coast of The Great Empire, and the Isle of Talos. It has been known to venture far inland and sink vessels. It is a fierce demon and hideous looking.

The armored cat is a Demon usually seen in the northern mountains of The Great Empire. Its tough armor makes it a difficult beast to fight. Sightings occurred in districts adjacent to the mountains.

This enormous spider can reach up to seven feet and is highly venomous. It is endemic to the Kingdom of Xbysl. Scott is the subject of folklore songs, the most popular being “Terragon’s Cry,” telling the tale of Terragon’s fellowship, whose mission was to keep the Kingdom safe by eradicating the spider. Terragon jumped from the Rock of Bon Esperance, with his sword drawn, and sliced through Scott’s belly. Although, he got stuck inside the beast, and both were sent to the Underworld. To this day, it is said that Scott keeps walking erratically. Some say that Terragon is still fighting from the inside of the creature, trying to protect the Kingdom.

Medea is known as an ancient witch who created the Machina – a giant robot – from Kempe’s. This mage is an evil being who causes fear in the mind of Lootizens that cross her way. Legend has it she roams the southeastern part of Vault Atoll and quietly disappears if you do not say a word.

Harpy was the first creation of Niefel to steal Talos from his family (Kempe and Fagra). This half-bird and half-woman beast casts a large purple shadow when escaping the Underworld to roam the Lootian lands. The sound of her vast wings is like electric sparks, and her unmistakable approach is a warning, especially for airplanes.

The trickster’s blonde hair and pointy ears would remind Earthians of the dark elves were it not for its short dwarf-like stature. Very cunning, this wandering dark elder can influence leaders and sow distrust amongst people. Whenever there’s war afoot, look a little deeper, and, in the background, lurks Wongliang, or how Lootizens used to call him in the first epochs, the Dark Viss.

This horrifying beast has bristling spines and dagger tusks. When hiding in the woods, it is often mistaken for a regular boar until it is too late. A closer look at Legion reveals glowing red eyes, white metallic-like tusks, and blue hoofs. It can cover 20 feet in under a second from a standing start. A few decades back, following the Kilgorlie massacre, the Government of Lootverse issued a notice to stay away from wild boars in that region.

Norash is known as the first two-winged Demon. It appeared in the Witch’s Woods in The Great Empire for the first time. Winged Demons are considered shy and hardly ever venture beyond the woods. Norash is covered in dark scales, holds a black sword, and can instill despair in the most accomplished warrior. At times, Norash can be seen at the side of Norashi, his red-scaled sibling.

The second of the two-winged Demons to appear in the Witch’s Woods in the Great Empire. Norashi is covered in red scales, and it is usually seen holding a flaming sword. Lootizens reported that, sometimes, it is spotted at Norash’s side, its black-scaled sibling.

This ancient witch seems to grant devious wishes to travelers. Be wary since a wish from Bobayaga is not what it appears! Legend has it the price is a Lootizen’s soul. Unfortunately, many realized this too late and had to fight or die.

The horned man is charming and tempts anyone that comes across it with deals of greatness. However, much like Bobayaga, it takes the soul of anyone who makes a deal. Earthians have many names for the horned man, including the Devil, Satan, and Lucifer. Lootian scholars are researching the similarities between Earthian theology and a theory that Heaven and Hell have roots, in fact, in the Lootian parallel world.

This unassuming goat with alabaster eyes encourages hatred and distrust. Bafomot was seen for the first time in The Medici Principality and has long since been part of the mystical appeal of the island. It does not show the same strength as its Demon brethren and is quickly dealt with by attackers.

Gwuai looks like any Earthian bear, except for the distinct blue and white pattern on its back. It appeared in the districts around Hill Station X012 in the Kingdom of Xbysl. It is common and can be quickly sent back to the Underworld with the appropriate weapons.

The wolf in the night is said to have ravenous yellow eyes that can stare into one’s soul. No living being has ever seen its natural form except for Niefel. There are parallels between Nostros and its Earthian derivative, Werewolves. It can appear anywhere on the Lootian lands, and specific weapons are crafted to send it back to the Underworld.

Palik’s beauty is unmistakable and often lures men and women with her voice. Palik commonly visits the northern part of Royaume De Satoshi and can be fought back to the Underworld with minimal effort. Northerners are known for seeking out the Siren for just a brief moment of pleasure before shielding and attacking it to return it to the Underworld.

Decimus (Greed of the Fallen Man)

Decimus escapes the Underworld to roam the Lootian lands more often than you can imagine. It has four tiny wings, one on each arm and foot, that sound like a hummingbird’s fast flutter. It seeks to control the mind of Lootizens and is also the least destructive of all Demons. It is mainly considered a pest by Lootizens, who regularly send it back to the Underworld.

This Day in History: The Fourth Installment of The Book of Talos